I was raised with feline pets rather than a lot of dogs and so was my hubby.  It's only natural that we would have a house full.  In our previous apartment we shared a large deck with our downstairs neighor.  One night around dusk while sharing some wine, we heard screeching from above.  Back and forth...back and forth.  It gradually stopped and landed in a nearby tree.

A very large owl with talons for days!

Beautiful, creepy and unnerving to be so close to one staring at you with huge unblinking eyes.  Out of the corner of my eye I saw something tiny run under the deck.  Then another.  And another.  Of course we jumped up and assumed it was a family of mice and the owl was intent on it's prey.  Eventually the bird moved on...and the "mice" wandered out.  It was a litter of baby kittens!!  The mother was no where in sight and we later learned that another neighbor had taken her in without knowing she had given birth.  We promptly gathered them up.


"Oh no way Mr. Owl.  You're not getting your big scary claws on this pile of kittehs."


We truly meant to nurse them to weened age and give away to deserving homes.  I mean, there were already two old lady 15yr olds cats running the household that we adored and we weren't in our house yet.  No room.

Sylvie and Sheba
1994 - 2009
Well, the little ones kept growing, eating, playing and getting cuter by the day.  So we adopted all five.  The very best part is that the mother cat "got around" (if ya know what I mean) and because she bred with numerous alley men, the litter ended up being very diverse.  They are almost three years old now!  We found them about 3 months before our wedding in '08 and are all very different.  Their names are of the more generic nature since we hadn't planned on keeping them, but they fit the personality.

In order of size: 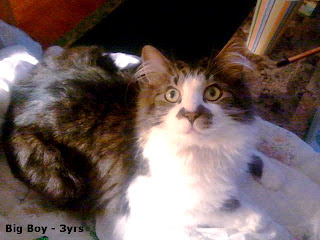 JINX - large all black male (part siamese) skittish and sweet...loves his belly rubbed and slobbers on you.  More like a leaky faucet dripping.  He's so handsome.

CALI - standard size female (calico) very fast and 'the hunter' of the group.  She'll stalk moths and when her prey is defeated, she'll growl at the others if they come a step closer.  Doesn't take crap, but is so loving.

TOOEY - female (short hair tortoise-shell persian) she is a daddy's girl!  Talks to you, chases toys and returns them, curious to a fault and very spoiled.  I think she's part dog.  The name started out as "Two Face" because her coloring is split down the middle on her face.  She's smart like a dolphin.

BITTY BIT- little female runt of the litter (calico) our baby Bit Bit is "special."  If it's possible, I think she might have feline down's syndrome.  She is in her own little kitty world and we love her for it.  When she's around you'll hear, "Awww...bitty bitty"  A LOT.  The best is when she runs up to you out of nowhere...plops on your feet...will allow a 3 second petting and then takes off like a little rabbit.  We just say, "See ya." 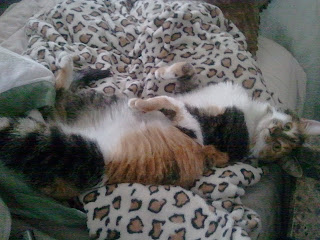 Bitty Bit chilling on the electric blanket.  aka "Woobie"

Coming up next:  How to make your own Kitty City.  The reason for this post was the awe-mazing and fun city that takes up a 1/4 of our living room.  I built it from scratch and it took me over a year.  It's pretty cool.  If you're into that sort of thing that is. 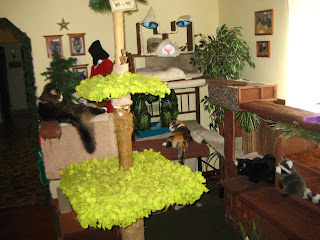 Jodi Firth
On an eternal quest for insight, humor and thought provoking viewpoints. My pink picket fence is near Cincinnati O-Hi-Yo. I'm a magnet to lots of things: color, quirkiness, wit, frankness, gooey cheese, friendly people, laughter, black coffee, pen sketching, the outdoors, my Canon, weirdness and being married. I have an offbeat sense of humor. I'm a full time artist and addicted to creating, learning new skills and finding inspiration in everything imaginable. Thanks for hanging out with me! xoxo